This week, Patrick digs up his Year 12 diary to rediscover what music he was listening to in 1999: 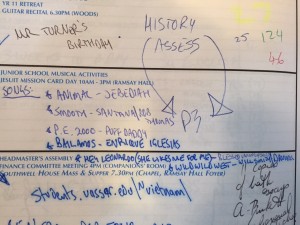 In the primary monologue Patrick reflects on Wes Craven’s contribution to 90s culture. You really should listen to the discussion and enjoy the audio embellishments, but here is a written overview:

One of the main reasons I wanted to do this radio show is we are really experience a 90s revival. Over the coming weeks I’ll be going into different aspects of this in more detail, but we are seeing a lot of 90s cultural touchpoints returning to prominence. The X-Files, Twin Peaks and Full House are all being revived in various guises. There’s an NWA film on top of the US box office and Dr Dre is top of the charts. A new film about David Foster Wallace, who, incidentally kind of invented Netflix, is generating Oscar buzz. The 90s is finally retro cool! Another of these landmark 90s titles being rejuvenated is Scream, which was brought back to life for another romp through the night by MTV. The 10-episode season concluded today and MTV has commissioned a second season for 2016. At the start of this episode, the show paid tribute to the director of the original Scream film and its three sequels, Wes Craven, who died on Sunday 30 August 2015 at 76.

Not only brought the horror/slasher genre to the mainstream in the late 80s, early 90s, kickstarted the 90s revival with Scream. A very 90s film, Scream was written by Dawson’s Creek creator Kevin Williamson and starred 90s-tastic names including David Arquette (from Buffy The Vampire Slayer), Friends’ Courtney Cox-Arquette (they met on the set), Party of Five’s Neve Campbell, Marilyn Manson’s one-time paramour and Doom Generation it-girl Rose McGowan, Drew Barrymore and Matthew Lillard, Jamie Kennedy and Skeet Ulrich: three guys who were really famous for a few months in 1996.

Scream is a classic mix of jump scares, one-liners and self aware humour that was squarely aimed at an audience that was tired of the cliches it was simultaneously exploiting and avoiding. It opened just before Christmas in 1996 with $6.4m and went on to gross $103m. A huge profit off its $15m budget. In line with its meta charm, there were three sequels of diminishing returns and a slew of copycat films trying to tap into slasher/horror/humour zeitgeist. By the end of the decade there was I Know What You Did Last Summer, Urban Legend, Idle Hands, The Faculty, The Skulls, Final Destination, Teaching Mrs Tingle and reboots of the Halloween, Friday the 13th and Nightmare on Elm Street franchises. They all seemed to star Dawson’s Creek alum and were mostly cinema detritus. Except for Urban Legend: that was a brilliant film.

All told, the Scream franchise grossed $338m off a combined budget of $119m.

Of course, despite being layered with irony and a satire itself, Scream inspired its own parody franchise, the Scary Movie films, which I guess are as funny as you are high when you watch them.

The public interest in comic horror began to switch to more earnest scares in the naughties as Hollywood remade the Ring and Grudge franchises for English language audiences and then the Saw franchise, with its low budget horror gore high concept premise did huge business.

And weaving its way through this hour of 90s retro is music by Arrested Development, Edwin Collins, Smashing Pumpkins and heaps more.