The prolific boys are back for their fifth LP in five years and their first as a foursome. It’s One Direction’s Made In The AM! 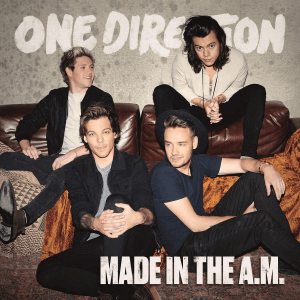 We all know DRAG ME DOWN, the boys’ long-awaited maiden Oz #1 toe-tapping, NASA heights hitting singalong w/ lovely echo play in the bridge.

2/4ths of 1D + 4 others collabbed on the standout PERFECT, though my enjoyment is disrupted by wondering what places Harry can’t pronounce.

Ambitious INFINITY is redolent of 5ive’s Baroque moments, viz UTTIT, complete with a time change but a weaker hook than Garrett Hedlund.

Liam is the most vanilla (or is it valium?) lad and his blandness buffets through on END OF THE DAY; woohoo boybandism at its laziest.

My fave boyband has always been Westlife and their acme is recalled on the quixotic IF I COULD FLY. There’s no ‘if’, this is spectacular!

Like a philtre to the romantically pusillanimous LONG WAY DOWN sucks us in with gnomic lyrics set to a lovely 1980s bass beat recrudescence.

Blue Swede took it to #1, Reservoir Dogs made it cool and Guardians of the Galaxy revived it for the kids. There’s NEVER ENOUGH of ooga!

Always thought it dangerous to name a song for a girl, lest any non-OLIVIAs become scrofulous with nv. Nice enough if instantly forgettable.

Devastated WHAT A FEELING isn’t a stealth Flashdance reboot but a hint of Erasure is like emollient luxe on the ears. Made in the mulberry.

LOVE YOU GOODBYE is a simple, likable track, if a little too much by the numbers. 1D’s edge has always been their edginess: sorely lacking.

I WANT TO WRITE YOU A SONG (ironically penned without any 1D input (by the dude behind Moves Like Jagger no less (+ 2 others))) is nice.

HISTORY is an upbeat coda to an unnecessarily sincere if OK record. Speaking of the ebullient past, I’m off to enjoy the Kiss You video…