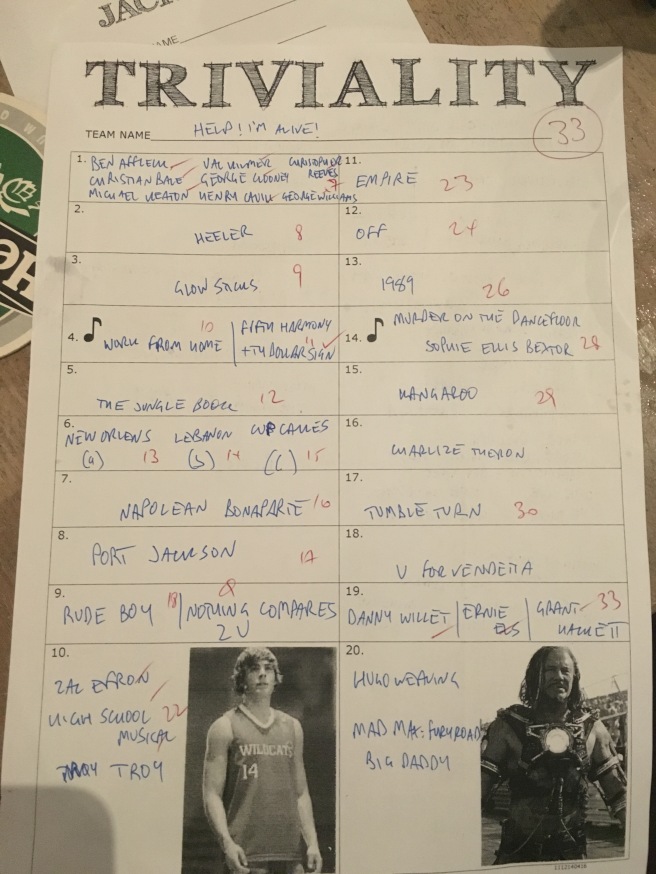 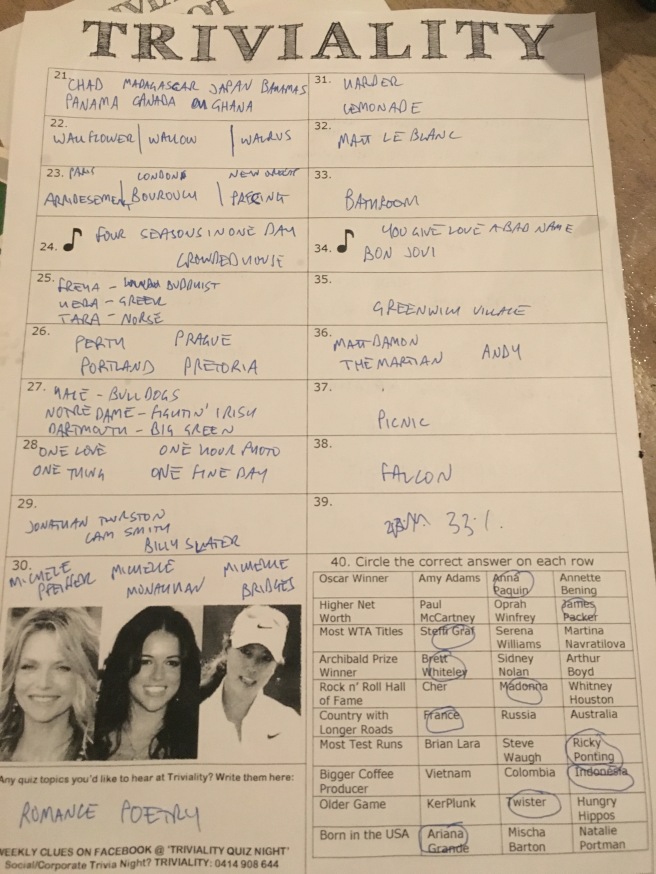 Almost 14 years on from the first This Week Is Trivia Week I am back out pounding the pavement every night this week (except Friday) trying to take down pub trivias across four corners of (inner) Sydney. The first stop on this erudite adventure was The London in Paddington.

In a smallish but cosy public bar area with a delightful view of the pokies room, the smart set of Sydney’s el trendoid area gather for the rareish Monday night quiz. The staff have impeccable manners (and this would pay off for them later in the evening when the one operating the TAB counter overpaid my winning NRL betting ticket and I returned the excess largess upon noticing), happily changing a replay of the NBA on ESPN to Monday Night Football on Fox Sports 1 (and I was impressed the young lass knew it was on channel 501) and all pizzas are available for $15. I was sat at a burnished wood high table surrounded by four backed and arm-rested barstools, three of which would be vanished in the 30 minutes leading up to the 7:30 start by copunters asking me ‘is that seat taken?’.

“But I’m playing trivia as well,” I replied looking up from my author-signed hard cover edition of Oryx And Crake.

“By yourself?,” the group’s den mother retorted incredulously.

Don’t sympathise with them: they found a table eventually.

Michael is your host at the London and he represents Triviality Quiz Night. He may the one and same Mike Jury (“owner-operator”) of said organisation; it’s hard to tell because he is looking up to venus and wearing sunglasses in his Facebook profile pic. Friendly with an understated charm and a welcoming manner, Michael starts proceedings with several ‘oi’ questions about current events. What’s the name of the new Star Wars spin-off film? What do you get if you call +46 771 793 336? What play were two New Zealand boys performing when they injured themselves with razors? If you know the answer, you call out ‘oi’, raise your hand, and if you answer Michael correctly you win a funsize Mars bars (which, y’know, isn’t nowhere near as much fun as a fullsize one). These bagatelles to kickstart trivia are obviously harmless and I am loathe to criticise since Michael dug out a spare bar for me having kinda tied on the New Squealing question, but these do tend to degenerate into fits of screaming and, as it would turn out, wasted questions.

Trivia proper started with a big superhero 8 pointer: name all the actors to have played Batman and Superman in feature films since the 1980s? So that’s 8 points if you know your comic book films, which is a broadly popular topic. Question 2 is what Australian breed of dog comes in red and blue varieties? So 1 point for knowing your dog breeds. Also 1 point for alighting on glowsticks from the composite chemicals, picking kangaroo as the mascot of the RAAF and linking Kate Hudson to Fabletics. But then huge points were on offer for naming countries with only As for vowels (7), various Gods of love (3), US college mascots (3), films beginning with ‘One…’ (4), neighbourhood nicknames (3) and — I’m being serious here— words on page 1614 of the Macquarie Dictionary (3). The capricious weighting of points for questions/topics was totally out of whack. There were too many points available for some questions, rendering other virtually meaningless. The best trivia has 1 point per question for the vast majority of questions, with only a handful — three or four — being worth up to, as an absolute ceiling, five points. The occasional 2-pointer is okay, especially if there is a significant step-up in difficulty degree; otherwise it is more likely that teams will score all or nothing for these questions, rather than a more even spread across teams of all/some/none points being allocated.

I did notice that the overall tone of this trivia was one of frivolity, and I’m eduguessing Monday night trivia is more conducive to an itinerant crowd that needs to be kept entertained throughout the evening. Michael mentioned several times that there were lots of points still available and it was obviously his fear that if a team had fallen away viz many points behind the leading pack at half time they would up and leave. The corollary of this is not just lotsa points but also lotsa guesswork. The second half of the quiz was chocful of multiple choice and mix-and-match questions, which is the enemy of good trivia. Instead of the trivia being about knowledge, multiple choice reduces it to a luckathon. All the other teams seemed to have 200 million players on them so the thinking must be that multiple choice = getable = these teams won’t leave if they are flailing but it makes for tedious trivia. Of the 20 questions in the second round, 2 were music and 2 were visual. Of the remaining 16, 8 were multiple choice. That is seven too many.

One thing that was clear from Michael’s delivery was that many of the questions are written to a protocol. Each week he reads out an IMDb film synopsis and you have to name the film. Each week he does a 2-point song lyric question. Each week he does a film quote 3-pointer. Each week he dives into his dictionary for a definition 3-pointer. You can reverse engineer these questions from the sheets above (the second one isn’t marked because I correctly predicted it wouldn’t be returned after the second/final round). Some people find the formulaic comforting but it seemed a bit lazy to me. With just a little bit of effort, these same questions could be sexed up into an original and witty form, preferably reduced to only one point each.

It’s not all negative though: the question about what innovation Al Vende Weghe introduced to swimming in the 1930s was an absolute cracker!

The very last ‘question’ of the night was a 10-point guessing game— I topped scored with 8— that virtually nullified all the erstwhile  1-point questions, regardless of their guessathonniness. This is where I yearned for a return to the ‘oi’ questions, but as actual questions. These questions were all perfectly fine, well-crafted questions that we should have been answering with pen and paper, rather than yelling out answers over the pulsating sound of Warren Smith commentating the Storm v Doggies in a replay of 2012 NRL Grand Final.

Inane questions aside, this trivia was also chocful of chocolate. In addition to the Mars bars, there were also three different varieties of Tim Tam packets to be won by naming actor/ess from his/her films (I nailed this with Tilda Swinton: boomshakalaka), a city from historical and geographical descriptions (Detroit) and a person from Who am I? style biographical details (Waleed Ali). This was quite well done, as was the bottle of wine Heads or Tails true or false competition, which was one of the best (ie win with knowledge rather than guessing) constructed examples of this classic from the genre that I’ve played in my 16 years of pub triviaing.

I condone Michael’s strategy of playing a song and giving one point each for title and artist but I demur his practice of stating the year and giving hints (“it’s a girl group”), and the songs were very easy this week, reaffirming my belief that this is intended to be a night at the low end of intellectualism. I also like how he has a section where you can write in topics you’d like covered in future, into which I naturally wrote ‘Romance Poetry’.

With 80 points I finished fifth of maybe 20 teams, five points behind the winners. My ‘team’ name was Help! I’m Alive! because Matt & Alex played the Metric song on Triple J breakfast earlier that morn. First prize is $80, second prize is $40 and the encouragement award (which I’m guessing is second last but I’m not 100 per cent on that) is a bottle of wine. Fucking fit prizes!

The jackpot was $225 and the three questions were (abridged from their insanely long original forms):

Incidentally, The London is a very nice pub. Keep it in mind for Sunday sessions or East Sydney crawls. In the trivia game of pub/sport alignments, I would write down Rugby Union on my answer sheet next to its name but in the two times I have been there they have been very accommodating to rugby league and AFL (which is the sport’s name in Sydney) watching. Classic pub food, lotsa beers on tap, a TAB and the obligatory poker machine tap factory are all there for your gorging pleasure!

Michael seemed like a very nice guy and the pub was pumping with players eating pizza and downing pints so take my criticisms with a grain of pepper. It was just not focused enough for my elevated trivia standards. Too much multiple choice and too many multipoint questions devalued the night, which is a pity because Michael is obviously a talented host and, if he is also the question scribe, has fleetingly demonstrated his ability to write good questions. I would recommend London trivia to a big group of friends looking for a happy night out guess-answering pop culture trivia while boozing up and watching Monday Night Trivia. Even  without much focus or nous you can score some chocolates or a bottle of Chateau Verdafloor (and Michael did call it that). I would caution against this particular trivia if you are a hypercritical trivia purist who would bring a Margaret Atwood book with them on what is supposed to be a fun night out.