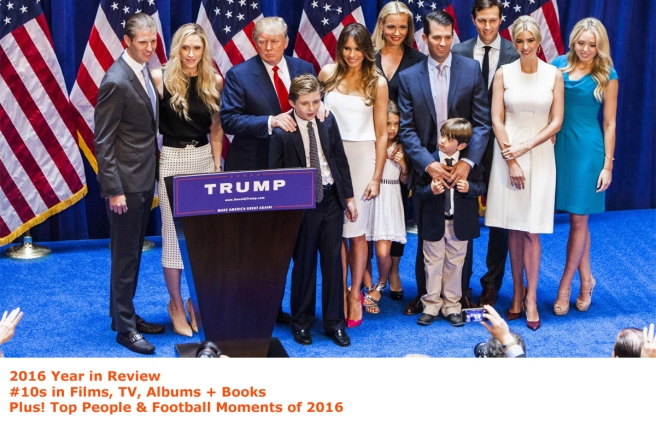 While not halfway home yet we are entering the Top 10s for the four flagship categories being discussed and dissected by the 2016 Year in Review. Today’s special feature topic is Top People of 2016, and who can say they competed as fiercely in 2016 as the happy, smiling not at all unusual family pictured above? I’m on my first day of holidays and I am sat at Crumbs cafe in Cremorne with a large long black coffee in a takeaway container about to eat a toasted bacon and tomato sandwich on linseed for lunch.

(Eagle-eyed readers, ie nobody, will notice that the Top Football Moments of 2016 is advertised in the header pic above. Due to time contraints, this is being put back till tomoz.)

Demolition is extraordinary. I actually cared about Jake Gyllenhaal.

As my above glibness hints at, the sign of a good film is one that Jake Gyllenhaal stars in that doesn’t leave you reaching for the nearest bathtub and straight razor. The sign of a spectacularly good is one that has JG hitting all your feels in all the right places. Demolition came to Australia as part of the Sydney Film Festival and my session at the Cremorne Orpheum was packed to the chardonnay stand with highly emotive buffs carrying a rare propensity to audibly react to character developments being played out on screen. That made for an orgiastic experience as there were arcs aplenty in this Jean-Marc Vallée vehicle. Jake, who was the young boy in City Slickers FYI, becomes freshly widowed in like the first scene (that’s not a spoiler I promise) and then finds solace by calling and writing letters to a vending machine company customer service officer. While the people behind slightly overpriced but conveniently located soft drinks and empty carbs are helping him to heal, his in-laws are rubbing against him, reminding him that he is/was comme on dit not good enough for their precious daughter. Academy Award Winner Chris Cooper plays that Dad, Academy Award Non-Winner Naomi Watts plays the vending machine gal and an Academy Award Statuette plays Jake Gyllenhaal’s character. That was a terrible joke. The film’s title comes from the destructive pastime providing catharsis to our bereaved widow, and he shares this hobby and time on screen is some gorgeously realised two-handers with youngster Chris. There are a whole lotta twists and turns not mentioned here so don’t for a second think this is some 1D huggin’ and learnin’ basic white male narrative, the kind you can buy out of a Hollywood vending machine. Director Vallée has previously made three films I really liked — CRAZY, Dallas Buyers Club and Wild — and the metaphorical/physical hits keep on coming in Demolition.

(A quick interruption to update you dear readers on my #16 TV show of 2016: Search Party. I have now finished watching this show and had I showed more foresight in recognising its potential alacrity in watching it, there is no doubt it would feature much higher in these rankings. It is superb! I stayed up last night snacking on raw cashews to finish it off and I was thoroughly impressed with the unraveling of the mystery of the missing Chantal.)

Girls had slowly slipped from anticipation TV to routine TV to duty TV over the past three seasons but in a real return to form a la Victor Moses the Lena Dunham moving tattoo righted itself and delivered 10 magnificent vignettes about the lives of women (and men) navigating unwanted maturity, the encroaching necessity of employment and the challenges of rival coffee shop customers stealing your lids. Shoshanna’s dalliance with Japanese culture provided for one of the best single episodes of television in 2016, while Hannah’s inability to reconcile the quotidian nature of public school teaching with her rebellious nature constantly cracked me up. In a world where so much of our filmed entertainment asks us to empathise with boys treating their girlfriends poorly, it is refreshing to unapologetically be shown the inverse. Charlie’s descent into addiction was darkly poignant and Jessa and the alien didn’t irritate me as much as normal. I love everything to do with Hannah’s crazy parental unit. The highly charged conclusion, contrasting Hannah’s rare growth with her friends’ descent into violent madness was wrenching. There is one season remaining for Girls and it looks like Dunham and co will go out with the fans asking ‘why now?’ instead of ‘why not?’.

I think it’s fair to say Donald Trump had a better year than any or us expected or wanted, except maybe my friend Matthew who called it from the off and never wavered! Another winner was Nigel Farage, who could well be the devil incarnate. And what about Mike Pence! Before anyone had ever heard of him, he was just the nobody governor of Indiana committed to channeling money out of HIV/AIDS research and into gay conversion therapy, now he’s just a 70-year-old morbidly obese fat food aficionado’s querulous heartbeat away from the presidency.

Closer to home, Malcolm Turnbull survived a surprisingly razorthin election and managed to last a calendar year (touch wood) as Australia’s prime minister. Despite that, one instinctively feels that Bill Shorten actually had a better year, maybe because expectations for the Gimliesque union gameplayer are shoe tread low. Glenn Lazarus certainly didn’t do as well with Queensland voters sans Palmer greasy palms, making way for prodigal xenophobe Pauline Hanson’s return. I hope no-one tells her that some people are both Asian and Muslim.

Haha Ryan Lochte! People get all worked up about these things but I thought it was very amusing. Other losers from the year that was include everyone whose surname is Clinton and Bush, which is kinda funny because normally when one of them loses the other wins, a bit like Batman v Superman, except I think the US presidential election campaign was the only thing shorter than that film. Tim Kaine adds his name to the most pathetic roll call of trivia answers, alongside Joe Liebermann, Jack Kemp, Geraldine Ferrera, John Edwards and Paul Ryan. Actually, Paul Ryan is doing okayish.

Linn-Manuel Miranda deserves praise for being simply unstoppable, as does anyone who has managed to finagle a ticket to Hamilton. Leo finally got his Oscar! Taylor Swift won Album of the Year again: just imagine how that makes Thom Yorke and Kanye West feel. Bob Dylan warmed our cockles by winning the Nobel Prize for Literature and then repaid all our faith in him by acting like a petulant child from that moment forward. Colombia won the Nobel Peace Prize, which must give hope to all the off-season AFL players snorting coke in the Crown Casino bathrooms at this exact moment.

Long-suffering fans who stuck by the Cronulla Sharks, Western Bulldogs, Leicester City Foxes, Cleveland Cavs, Chicago Cubs and Bayern Munich all finally had their loyalty rewarded. I guess the players deserve some credit too.

Times like this having a degree in sociology comes in handy. We are all the product of the ever expanding circles of relationships around us. I am very grateful for the friends I have: obvs the extant ones but also for the time I have spent with the ones I have drifted away from or had unilaterally excised (I tend to put people offside quickly and irredeemably). Don’t ever be afraid to call me and ask me to apologise.

My Man of the Year for 2016 is Barack Obama. He has conducted himself with remarkable dignity in the face of craven racism and feckless obstinacy. He narrowly beat out Drake.

My Woman of the Year for 2016 is Michelle Obama. She is a sensational role model, underrated fashion icon, outstanding intellectual, gripping public speaker and terrific advocate for health and fitness. She narrowly beat out Drake.

Olympia is a true Triple J Unearthed success story. The singer songwriter combines elegant hooks with wry lyrics delivered in a sharp, clipped natural vocal style. While her contemparies are butchering their songs through autotune mutilations, Olympia keeps the natural variations in place and the result is pure alt-pop perfection. Most of the songs come across as unsent love letters to past or imagined partners — sure it’s a staple of the genre — but the overall tone never dips too far south of soulful into grieving or maudlin. From opening number Honey, in which Olympia asks “what am I doing with my life” while her lover plays the pokies at 3am to the relationship destruction on This Is Why We Can’t Have Nice Things to the communication breakdown on Smoke Signals, Olympia sings of collapsing relationships and disparate hearts with a relatable tenderness that is gentle and affecting.

(not for the first time: this refers to my fave moments of reading from the year)

Just noticed this when stuck into some Easter evening reading…

Oh Snowman! Oryx and Crake is Margaret Awwood’s nightmarish antiutopian tale that brings together the fraught realities of climate change, the terror of child sex slavery, the uncomfortable corollaries of advanced eugenics and the inherent absurdities of organised religion. The author once kindly signed my Mum’s copy!

While not as singularly powerful as the mesmerising tale of a theocratic North America where low caste women are enslaved for breeding with high ranking officials (The Handmaid’s Tale) or of the corrosive impact of childhood bullying on adult expressiveness (Cat’s Eye), and certainly not up to the standard of her nonpareil epistolary romance mystery The Blind Assassin, O&C still manages to enthral with its diverging stories. The central narrative sees Snowman living on a beach after some cataclysmic event has decimated mankind. As supplies run low, he endeavours to traipse through the wilderness, avoiding genetically mutated super animals, to find food and answers to the mysteries of his circumstances. My Mum doesn’t like how didactic Atwood’s writing is but I don’t mind as it means less thinking for me.